Ciao! Our introduction to Italy whirlwind spring break trip kicked off Monday morning with a bang! It is crazy to think how much we have jam packed in every day to get a real taste of Florence and it is only Tuesday evening! Between art museums, painting class, shopping, eating, wine tasting and language learning there is still so much more to come! Here is a sneak peek into what we have been so busy with:

As an International Entrepreneurship class, we have been given a project to complete when we get back. This project revolves around a family owned and operated winery that is situated in the Tuscan hills right outside of Florence. This winery, in operation since the 1700’s by the same family produces a few types of red wines very famous in the area. A really interesting fact about the estate is that the Machiavelli family built it back in 1419 and owned it until it became a winery.

Fattoria Bagnolo winery is best known for a sweeter red Chianti wine as well as a hearty Super Tuscan style. We met Marco, who took us around the facility to explain how he makes his wine and sells it all over the world. This is considered a “small” winery, only producing 25,000 bottles a year and while they do well Marco doesn’t care about the money. He simply does it because of the satisfaction he receives when his customers, friends, and family love his wine. He told us that he loves the art of wine making and that’s all that needs to keep him going. We also provided him a lot of satisfaction because he treated us to a tasting of his three most famous wines with a full spread of delicious Italian antipasto before we left!

One of the more hands on classes that we have enjoyed was on our second day being taught how to properly restore a fragile fresco painting that had perhaps been on a crumbling chapel wall. After a quick demonstration of the removal process, we were then taught how to create our own frescoes! 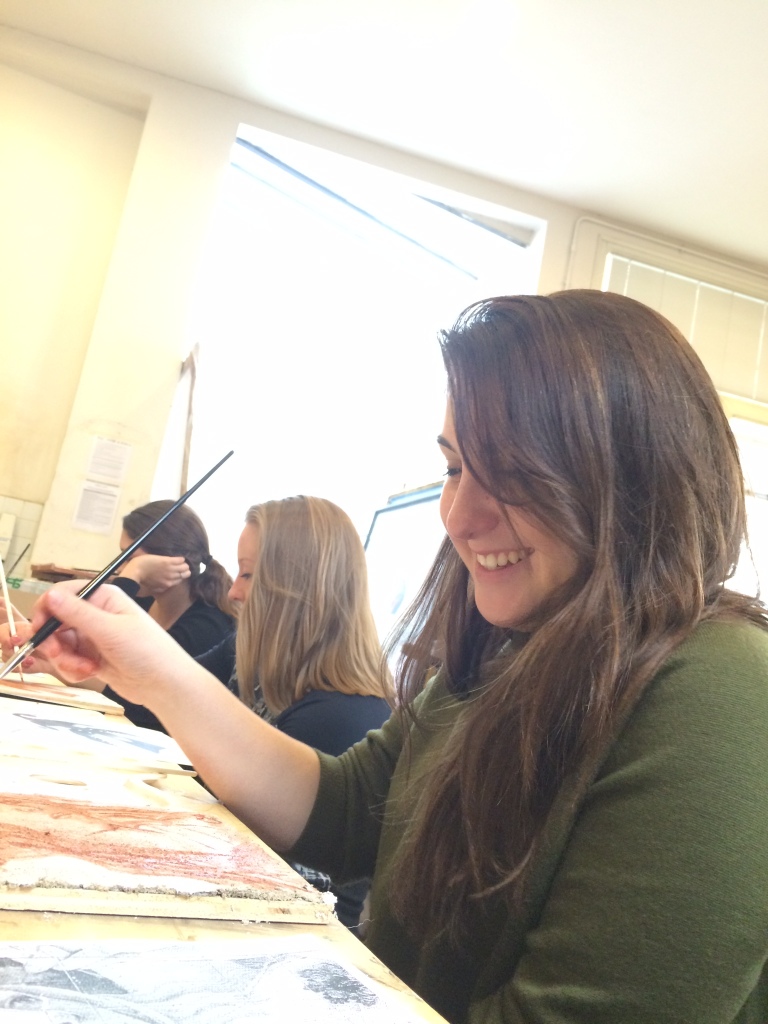 While we didn’t have months or years to complete them to the style of Michelangelo, we learned the beginning steps of just putting pigment on wet cement and letting it dry. It was fascinating, and now we each have our own piece of Italian artwork (or attempt at art) to take home with us!

We have had some free time to do a bit of taste testing, exploring, and of course: shopping! While we were wandering the historic part of the city, we stumbled across some gems we didn’t know about!

Trattoria di Giorgio is a small scale family run traditional Tuscan style restaurant situated by the Santa Maria di Novella train station that is a popular place for tourists and locals alike. The traditional three course menu includes a pasta dish for the plato primi followed by a meat dish for the plato secondi and a side dish or dessert (I recommend the tiramisú) of your choice. Traditional Florentine dishes include the Bisteca alla Fiorentina, a rather large cut of some of the best steak in the area. Best to share with 2-4 people for a steeper price, we have been told we cannot pass this up while we are here!

While window shopping, Courtney and I stumbled upon the first Gucci store! While Milan is usually thought of as the fashion powerhouse of Italy, Florence is the original home of this brand. A friendly sales associate told us that Guccio Gucci (yes that was his actual name) grew up rather poor in Florence and his mother used to window shop lamenting about how she could not afford the beautiful leather bags. When he was ten, he promised himself that someday he would make his mother a bag just like the ones she wanted. In 1921 he opened his first shop and it serves as a sort of a museum and store today!

I can’t believe how much we have done in such little time, and we still have three more days to enjoy! Tomorrow we are taking a side trip to the medieval city of Volterra. I am excited to see what charms it has in store for us!

One Reply to “Fabulous Florence”