I don’t remember if it was the croissant that was flaking in my, now buttery, hand or the sound of velvety soft syllables coming from those around me speaking French, but suddenly it hit me: Paris. I was actually here.

The idea for this trip (which seemed spontaneous other than the fact that we booked it 8 months ahead of time) came when I noticed a few non-stop flights from Chicago to Paris for less than $400. Since it seemed too good to pass up, I called my mom and we both decided not to pass it up.

Fast forward to October and here we are, on the Champs Elysées, with the previously mentioned croissant in my hand. A few things were overwhelming for this trip:

But no matter, we dove right in.

Day 1: A Brief Tour of the Entire City

While this seems extremely difficult to do, but thanks to Fat Tire Bike Tours Paris, we were able handle it. Battling a bit of rain (that eventually resulted in glorious sunshine), we oriented ourselves around the city with the help of a witty and knowledgeable tour guide. If you ever are in Paris, Barcelona, London, Berlin, or Rome, I HIGHLY recommend this tour! You can find more information about their tours here.

Honestly, this was the best way to start our trip because it helped us understand the layout of the city and helped us pick out places to come back to visit. Not to mention, I caught my first glimpse of the Eiffel Tower and was completely awe struck. This. Is. Paris.

The best part about the city, I think, is how easy it is to walk through! Two miles from our Airbnb to breakfast or back to the apartment after a night cap seemed like nothing when you’re surround by such beauty, and a very sparkly show at night…

Dressed in our Parisian outfits (all black, of course) we headed out to experience the once in a lifetime lunch reservation I had found: lunch at the 58 Tour Eiffel Restaurant on the first landing of the Eiffel Tower.

I say once in a lifetime because, while the food was lovely, the push and shove to get up the tower, look over the side, use the bathroom, etc, was a lot. While we were trying to feel like posh Parisians (because they definitely eat there…), we started to feel corralled and packed in like sardines.

In order to gain back some of our free will, we left after lunch to head to the area near the Champs de Mars, where many adorable boutiques can be found. Wandering these tight, winding streets helped us feel like we were right back where we belonged.

If anyone knows my mom and I, they also know that we love to shop. We could be considered Varsity Shoppers. The exhilaration of finding a pair of perfectly fitting shoes or a lovely lace dress was even more exciting since it was French! And there is nothing better than when someone asks where you got your dress and you shrug and nonchalantly say “Oh, this little thing? I picked it up on my most recent trip to Paris”.

But one of the highlights of our trip? We took another Fat Tire Bike Tour, but instead, saw the city at night! We couldn’t even understand the loveliness of the grounds of a deserted Louvre or a hauntingly beautiful version Notre Dame until we saw them for ourselves. Not to mention, our ride ended with a boat ride along the Seine included in the tour price (and plenty of free wine!).

Ahhh the famous Chateau de Versailles. Famous for its grandeur, long lines, elegantly well preserved rooms, absolute massive crowds of people, history, difficult to find bathrooms, Marie Antoinette, and did I mention absurd amounts of tourists? We even went in the off season and our sanity was quite tested.

What I would do differently:

The best tip I can give: make sure to see everything, because it is an overwhelming day trip to take again someday if you missed anything.

We decided to be a bit ambitious on this day and made reservations at the 93rd Best Restaurant in the world: Le Chateaubriand. It is a big deal, because the business casual, retro-classic looking dining space has a prixe-fixe, 10 course tasting menu for 70 euro, and every single thing we ate was delectable.

Also: this is a semi-casual restaurant. So a nice blouse and jeans is perfect. If you happen to show up in an off the shoulder, black, ballet length dress, you will look fabulous, but also overdressed. If that happens: c’est la vie, you’re in Paris! 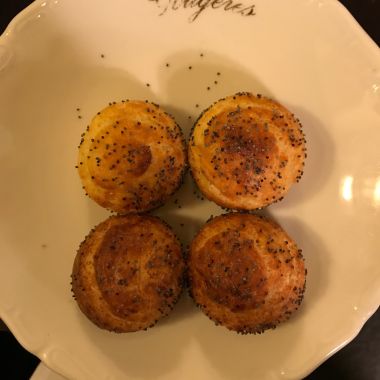 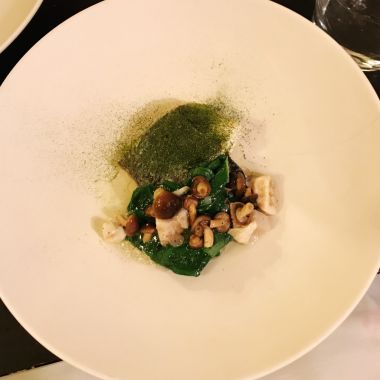 Above you see (from left): The menu (naturally), the artisan cheese puffs, seabring with spinach and scallopini mushrooms, then (my favorite), pear sorbet with smoked cream cheese and walnuts (absolutely delectable)

The only misleading thing: 10 courses sounds like a massive meal. So we made sure that we were very, very hungry. The problem: each course, as you see, was about the size of a thimble. So after a delicious world class meal, we made the executive decision to stop by another world class joint: McDonalds for a cheese burger and fries.

And oh was that a great way to close out our third day.

This was a brief summary of the first three days of our trip click here for the second half of our city trip and more recommendations on what to do when visiting!

One Reply to “Pretty Little Paris: Part I”